A pan-European T.V. channel/broadcaster for transparency? 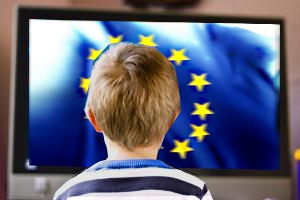 Wouldn't be great if we could have more transparency of what is going on in Brussels and the EU? People are in general unaware about the actions of the European Parliament and even a lot of the do not know who their MEPs are.

We need to allow them greater access to European politics, for democracy and the guaranteed success of the European project.

It is about time that people had an idea on what is actually being discussed in the European Parliament, as many decisions that are being made there affects them directly. The best way of achieving this in my opinion is the formation of pan-EU media.
Recently the Europarl TV was launched, a brilliant idea to reach EU citizens directly. The national Governments' lack of enthusiasm in informing the citizens how the EU works, can be at last dealt with. But then again the internet is great, but most people I know just download music,movies and videos from it, socialize in social network sites, or just keep in touch by e-mails.

Not as many actually go on-line to watch a speech given by an MEP in the EP. Besides there is the older generation that we need to attract too,or others that are the so called "technophobes" and those people do not use the internet for their information.

A pan-European T.V channel is more suitable for the European citizens.One that everyone can have access to it. There is Euronews of course for news and other topics,and the French/German T.V. channel ARTEL, but only about 7 million viewers in EU out of almost 500 million regularly watch them.

It will be a channel that if the public want to watch it , will be just one zap away. If they do not, then they won't. So no one can accuse EU of promoting its so called "propaganda." Because there are people that see every move by the EU of promoting and introducing itself to it's citizen's as one.
There could be (let's say the name of the channel is EUTV) EUTV ITALIANO, EUTV SVENSKA, EUTV SLOVENSKO, EUTV ESPANOL, EUTV HELLENIC, EUTV EIRE,EUTV SUOMI and so on. One channel for every language of EU, partly financed by EU, partly by the states.

It will broadcast the same context but translated in many languages just like Euronews is doing right now. The context will include movies, news, soap operas, cultural events, cartoons, documentaries etc from all EU members, along with EU news and broadcasting from the European Parliament.

In that way people of one country will get to know the culture and all the events taking place in another EU state. Besides with more and more expats living in another EU country, what better way in staying connected with the country of their origin?

Thus citizens of all ages and backgrounds could have access and an understanding for the EU activities and updates. In my opinion citizens deserve this.We pay and spent money for other ridiculous things , we should start working in gaining the trust and interest of the citizens for a change. I am sure it will pay off in the long term.

For direct European democracy and transparency, the television can become a great tool for information and stimulating an active participation in European politics, an active citizenship.
Tags:
Posted by The Eblana European Democratic Movement at 11:10 PM