Why austerity makes corruption worse; in Greece and elsewhere. 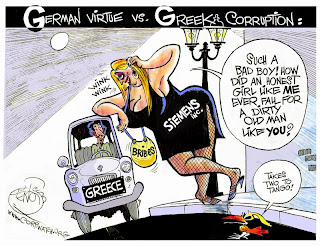 One of the main culprits for Greece's damaged economy and financial troubles-according to most European media and analysts-was the corruption that plagued the country.

Greece suffers from it at all levels; starting from government corruption, which inevitably trickles down to the lower levels of its society.

But where does the delinquency culture has its roots and why hasn't been eradicated yet?

In Greece we have a saying: the fish stinks from its head. That means that in an organization, family or a country, the problems arise from its leadership; the parents, the management or the government.

And since it is the government and the state institutions in Greece that are corrupt and dysfunctional, how can anyone expect the country to seriously tackle corruption?

Government corruption derives from many sources. The Ottoman and Byzantine authoritarian legacy, Greece's troubled recent history, its deep ideological divisions which are remnants of the civil war, the Greek Orthodox Church. The list can go on.

The reality is that the Greek elites oppose or are reluctant allowing the country to change, because if it does so they will obviously lose out; in power, influence and economic prominence.

They are indifferent in reforming the country, or tackling the red tape that makes doing business in Greece difficult. Nor dealing with tax evasion, as they are the ones who are the worse offenders. If they modernize the country foreign investors might come in, posing a serious threat to their monopolies.

On the other hand, Greece's elites have been wasting Greek and European tax payer's money, for sustaining the European and American industrial elites.

They have been striking deals with leading German companies, or buying American, French or German weaponry that Greece does not really need; to protect itself from Turkey, a NATO ally.

Instead of investing in reforming the country and its institutions, they are playing their part in a global and pan-European financial and political establishment. The only government that shows some signs of moving away from this mentality is the government of Syriza.

Yet Europe is working hard to overthrow it, because it is Leftist and it poses a serious threat to the Liberal and Conservative European establishment. If Syriza succeeds, more Leftist governments might spring out across Europe.

Consequently, because of their ideological differences or national interests, European elites are opposing any potential change in Greece. Disregarding of course the fact that the former establishment parties, did nothing to reform the country.

Furthermore the Greek citizens have naturally their own share of blame. Their culture and mentality is heavily influenced by the country's Ottoman past. Greece's citizens-especially those in the countryside- seek to have a very personal and nepotistic relationship with local authorities and the government.

That is how they were brought up. In the past, especially during the junta era you just did not challenge the police or the local authorities, which had absolute power over you. They could confiscate your property and exile you in the Soviet states, if you were even accused of being a communist.

Due to the very unstable political past, most Greeks that are now middle aged and hold the reigns of the country, were raised in absolute poverty. The two world wars, plus the civil one that followed, crippled the country forcing millions in deprivation.

Back then, very few Greeks were getting any education. Their majority were forced to leave school early, to support their families. With little education, a large number of them were forced into emigration to other European countries, or the rest of the world.

Opportunities were scarce and overall the Greeks adopted a very opportunistic and selfish attitude, in order to survive. Poverty created more corruption as it became common practice to evade the laws, or bribe the local authorities in order to get them off your back. There was no justice or equality back then, you could not progress without the right connections or bribery.

Whole generations grew up under such conditions. We are describing most people that are now aged over 50 in Greece and of course, hold the top positions in Greece's education, local government and industrial or financial corporations.

This generation is not going to change easily or proceed with any reforms. Doing business the way they do is all they know. In fact they are the ones who are responsible for Greece's demise. The country's very leadership belongs to this generation, with perhaps the only exception the current Syriza government.

If Greece has to change, it must encourage its young people into these top spots. They have furthered their experience and education in international European universities. They have traveled more, are multilingual and have new ideas, plus they are at their most creative.

Unfortunately the Troika/EU inspired austerity forced this young generation into either emigration or unemployment and poverty. Young people in Greece right now suffer from lack of opportunities and to survive, they will probably have to do what their predecessors were doing to survive; cheat, tax evade or engage in unorthodox and illegal employment practices.

Greece is suffering from a brain-drain, since nowadays it is the most educated and qualified youths that are leaving the country. How can Europe expect the country to reform itself and change, without its best resource; its young, skilled workforce. 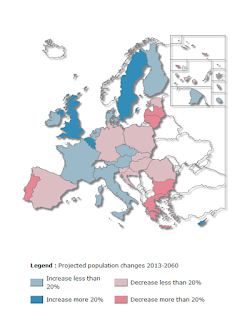 According to recent EU Commission report, Greece is to lose more than 20% of its population until 2060, due to its low birthrates and continuous emigration. Low birthrates that are also a result of poverty and unemployment, as young people can not start families of their own, well until their mid thirties.

The country will be a nation of pensioners, with few opportunities for young people. Any chance of reforms and a change in the Greek people's mentality, will be diminished with the continuous emigration. Older generations are more conservative by nature.

How does Europe hope to force Greece to reform, when it is condemning young Greeks into the same vicious circle of poverty, lack of education and employment opportunities?

These were some of the main reasons that corruption settled in Greece in the first place. The poorer a nation the more it suffers from it.

If the European leadership ever wants to have Greece as an equal, prosperous and dynamic member, it can't continue with its austerity policies that cripple the country's youth. Greece needs investments to offer employment opportunities to its young people and in addition reforms in government and local authority level.

Reforms that will never happen if Europe forces the Greeks into further poverty and constant humiliation. The more this situation continues, the more hard lined the response will be from the Greek people, opposing any reforms.

Or even worse, the on-going austerity and economic crisis, might further destabilize Greece politically and economically, resulting in an even more radical political party coming into power, like the Golden Dawn. With potential disastrous consequences for the whole continent.
Posted by The Eblana European Democratic Movement at 12:59 AM