The major European economies are the gangrene of this continent. 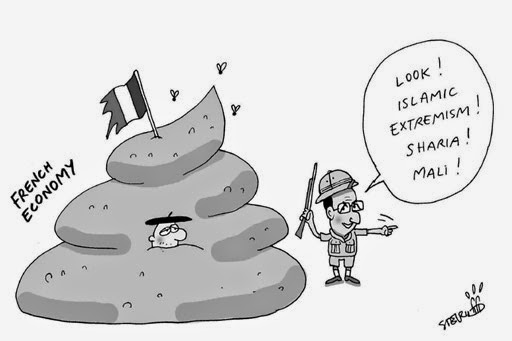 Ahead of the European summit in Brussels on 24 October, French President François Hollande said that economic growth was a bigger priority than the EU pact limiting national deficits to less than 3% of GDP, and that France would therefore apply a “maximum of flexibility” when interpreting the rules. (Debating Europe).

That of course means that France will once again "be forced" to break the EU budget rules, for the good of its economy and naturally, the good of all European economy.

Because "they are too big to fail," the EU leadership will allow France to bend the rules, instead of proceeding with a partial bail-out like in Spain, or tightening its supervision on the French economy. The excuse is that if France fails, Europe will not be able to bail it out and so the whole European economy will suffer, France being the second largest euro-zone economy.

That is true, but Europe can certainly place some limitations on France, so the country's government and policy makers do not act carelessly ever again. If limitations are not followed, then perhaps an IMF supervision if not a bail-out, would force the French leadership to focus on the economy and stop creating scandals around their private lives.

After all it is outrageous, only years after the EU and its richer member states slated Greece for breaking the rules and getting itself into trouble, now they are so lenient on France. You see it is easier to criticize and point the finger, when you know that the same rules won't ever apply to you.

It is not just the fact that Greece had to be humiliated from its very "partners," nor that it had to become the scapegoat for all the faults in the euro-zone and most EU institutions: what is even more unacceptable is that the Greek people had to see their living conditions dramatically lowered, just so the European banks-which include many French ones- could be saved.

If we examine the connection of the Greek, Cypriot, Irish and Portuguese debt with the German, French, British and American bond holders in their banking system, then it is clear that whatever money was saved from the severe spending cuts in these nations, went straight to the maintenance of the European banking system.

In other words, the Greeks, the Irish and the Portuguese, had to go through painful austerity measures in order the banks of this continent, but also the euro itself to be saved. And while these nations were happily sacrificed by the European elites in order to achieve economic stability in the continent, other nations like France are spared not just from humiliation but also the degradation of their citizens' living standards.

Thus it is clear that this type of "union" that the EU is at the moment, is anything but equal or fair. Bigger member states can get away with everything because they are too "important," while others are called to pay up and are humiliated on top of that, for something that was not entirely their fault in the first place!

It is not just France but also Italy, Germany and Britain who have been acting like bosses, spoiled brats and bickering divas for the past years of the crisis. We have witnessed the German elites dictating other nations how to "keep their books" or deal with their affairs, while they hold a less painful solution in their hands: Germany needs to start spending.

But because this would go against their very economic philosophy and also hurt their economy and interests, they think they can dominate the economic policies of the whole continent and tell other nations how to run their countries.

With the excuse of also being "too big to fail," or Europe's leading economy that has to bail out the rest of "less competent" member states, they have hijacked the European economy. The fact that the euro benefits their economy the most, while it is seriously hurting the rest of the smaller states conveniently eludes them.

And not just them, but all their satellite economies like Holland, Finland and Austria have been very bold in the past of criticizing other nations about their economic affairs, seeking to indulge their citizens with populism and cover up the cracks in their own economies.

Cracks that in the case of Holland but also Finland who recently fell back into a recession, can not be covered by blaming the Greeks, the Irish or the Portuguese anymore.

Britain and Italy are also up in arms over the EU's budget and we have even seen the British PM David Cameron lashing out at the EU, about a €2.1bn surcharge on the UK from the union's block, branding it as "unjustified." All this, even as it emerged that British officials played a role in endorsing the calculations. (Financial Times).

This bill in other words has been agreed by all our government officials beforehand, but Cameron just wants to indulge the British public with some good old traditional Tory Euro-skepticism. As UKIP gains popularity, he is basically trying to save the interests of his party and his career as PM, using the EU once again as a scapegoat.

It is clear that the EU is a serious mess, not because of the "laziness" of the smaller states, rather the constant bickering of the major economies of the continent. France is arguing with Germany, Britain with both and the EU itself and Germany with everyone else in the block, about how the European economy should be run.

The interests of the countries who are branding themselves as "too big to fail," are hurting the unity of Europe, but also the economies of all the smaller nations caught up in the middle of the big nations' power games. And while the citizens of the peripheral economies are seeing their incomes slashed, the living standards of those in the big economies remain the same, if not getting better.

If we want to keep the euro and build a fair European union, the living standards, salaries and pensions in the euro-zone must be harmonized. In other words, if the salaries of the Greeks are slashed by 40% in a couple of years, then something similar must be applied on other richer euro-zone members until all reach a similar level.

Yet in this case the French citizens will evade such fate, because they are lucky to live in a country "too big to fail." But when the Greeks and the Portuguese arrive in their country seeking a better future, because Europe's economic policies have destroyed theirs in their own countries, then they will complain about the rise of immigration. Additionally perhaps just like Britain, they will seek to limit the free movement of citizens in the EU.

Something which I will remind them is a de facto right for all EU citizens since the creation of the Single Market, now the rich nations are seeking to reverse in order to protect their own interests. After reading all the above, one would ever thought why would any country would seek to join such union.

A union that is dominated by former colonial or imperial powers, that have not forgotten their skills of how to rob off resources from smaller weaker nations. All they have to do now, instead of invading them is to throw more and more debt on them and force them into bail out agreements, which they will have to repay for decades to come.

The real problem here is inter-governmental-ism and  the selfish attitude of the rich elites, of the richer nations that while trying to protect their own interests, are bickering among them on who will get the lion's share. There are two solutions for this mess: either dismantle the EU or proceed with a closer federation.

Dismantling it could mean a very messy break-up which most likely will destroy what is left of the European economy. Moreover it could also lead to war once again knowing Europe's recent history, or the absolute surrender to third powers like Russia, America and China. Once European nations are divided and weakened, it will be easy for other regions to rise and take advantage of the situation.

A closer union will mean that the interests of the "too big to fail" nations are put aside and a European federal or confederate government, will make sure that all countries are treated equally and wealth or opportunities are equally shared.

But Europeans have not yet reached a certain level of maturity to realize this and so protectionism, conservatism and nationalism prevails.
Posted by The Eblana European Democratic Movement at 2:09 AM