How "European" of you! 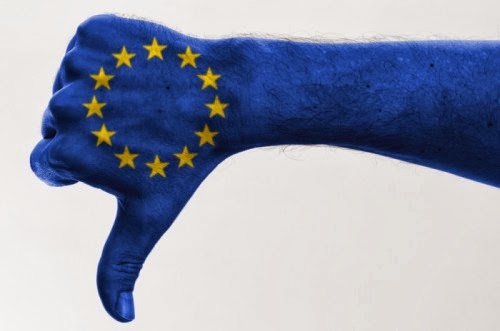 The past week I have been reading some very infuriating news stories from across Europe. It proves that sadly nationalism and euro-skepticism are here to stay.

If the European leaders want seriously to maintain the European institutions and project, they will have to show leadership and skillful decision making at last.

The first story comes from a non-EU state, Switzerland. We are very used to the Swiss conservatism and xenophobia, but this time the decisions that this country made, will have an impact in the free movement of people policies in Europe.

In a referendum today, the Swiss decided to put a cap on the number of people entering their country, in an effort to stop "mass immigration." The proposal for the referendum was proposed by the right-wing Swiss People's Party.

About 50.3% of the population voted in favor for the proposed legislation, which will mean that the country will have to abandon its free movement of people treaty with the EU, potentially putting at risk other deals with the organization on trade.

The issue here is if the EU do the same for the Swiss. If EU citizens are not able anymore to move freely in Switzerland, why should after all the Swiss be able to move freely to other European countries? Hopefully the EU will not allow this discriminatory policy towards some of its citizens to be implemented, without applying the same rules on Swiss citizens.

The Swiss are happy to allow capita and money from other nations flowing freely in their country, but when it comes to people, they become a bit choosy! I wonder if they will proceed with free movement limitations for the rich tax evaders that want to settle in their country, or such limitations exist only for the poor EU nationals.

If they were not a tax haven, they wouldn't be as rich and so migrants from poorer countries would not want to go to Switzerland. Now that the visa limitations have expired for Romanian and Bulgarian citizens, we are witnessing Britain having a difficulty dealing with it and Switzerland treating us with their good old xenophobic self, by wanting to limit the free movement of EU citizens.

The problem here is that while they are priding themselves about their democracy, sometimes when the decisions they are making are based on populism and their worse self, then their democracy become a "mobocracy". And that is a deviant form of democracy.

The real problem here is migration from the newest EU states, or the crisis hit nations of the euro-zone. And that aspect makes this development even more infuriating, as it is simply racist. When it suits some countries to implement certain laws and legislation they are happy to do so, until populism sets in. Such attitudes are of course not only a Swiss phenomenon.

Most EU nations battle with immigration and populist, right-wing or left-wing parties are mushrooming across Europe. Their growing power is fueled by the economic crisis. Even the country that is considered to be the "heart of Europe," has this week been the ground of a similar story.

Belgium decided to send "burden" EU citizens mainly from Romania, Bulgaria,Italy and Spain, a letter asking them to leave the country. The reason being that they are an "unreasonable burden in the country's welfare system".

The issue that I find peculiar here, is the fact that Belgium has some of the most generous welfare systems in Europe. While in Greece and other countries welfare payments are not being given to job seekers indefinitely, in Belgium they enjoy the benefit of long term social security.

This generosity of the Belgian social welfare system, is what attracts people from other EU and non-EU countries. The real solution to their immigration problem would be to reform their social security policies, making less attractive to "burden" migrants.

But this would also mean that the Belgian "burden" citizens would not enjoy the very generous pay-outs and which Belgian would support such reforms? Where would the Belgian social welfare recipients go, to avail of the very generous support, especially now that Switzerland is closing its doors too? Alternatively Belgium will have to break EU law and apply different legislation for Belgians and another for other EU nationals.

The problem here is that Belgium is what the capital regions are in every country. The capital cities are always enjoying  more affluent social services and infrastructure, than the peripheral regions of a country. Belgium does not produce as much as it did in the past and in fact it is one of the net recipients from the EU budget, because it hosts the majority of the EU institutions and the European "capital," Brussels.

In other words, the wealth of the country is not just "Belgian" to keep it just for the Belgian citizens. And let's not even talk about the fact that a lot of that wealth comes from their ex colonies, during the era of the country's colonial expansion.

I do not disapprove the right that every country has to protect its interests, democratically decide on its laws and practice what it thinks it is best for its citizens. But either it is Belgium, Switzerland, Holland, France, Greece, Germany or many other European nations, we observe a lack of real solidarity between them.

Each nation pursues only its interests and they succumb to the rising populism and pressure of extremist political parties. Instead of helping the countries of origin of these immigrants, or reforming their own social security policies to make them less attractive, they decided to go for the easiest option to deport-even if they ask politely- the migrants.

If Europe actually helped countries such Romania, Bulgaria or even Greece, Italy and Spain by encouraging job creating and investing in them, then their citizens would not be forced to migrate. The example of Italy itself is something that Europe must avoid at all costs.

That is exactly what is happening in Europe too. Even though the Belgians claim that what they are doing is within the laws of the EU and they are right of course, they are missing the point. People will stop coming to Belgium and become a "burden," only if they have jobs in their countries.

Of course I could not leave out from the list of recent euro-skeptic incidents, the developments in perhaps the most euro-skeptic countries of all: Britain.


British Conservative MEPs have cried foul over a proposal to create a permanent European Parliament sub-committee to deal with the single currency, saying it would have “major implications for the UK to regulate its financial services sector” and represented an attempt to “curtail” the influence of British MEPs.

Syed Kamall, the leading British Tory MEP in the European Parliament, said such a development would be divisive and dangerous. "To create a separate committee that only euro-zone MEPs may belong to sets a dangerous precedent. It is a case of divide and rule,” he said. (EurActiv.com)

I guess the British understand better the practice of diving and rule, since it is a policy that they have been applying for a long time. The funniest thing in this story is that the conservative MEPs, who would be excluded from the proposed sub-group, fear that important decisions could be taken behind their back.

Then why Britain is having a referendum to leave the EU, since if they do, that is what exactly going to happen. The British wish to stay in the single market, without being a full member of the union. But if they want to stay in the free trade zone, they will have to comply with policies that will be decided by the EU Commission, Parliament and Council in which they will not have any delegates, as they will have left the union!

In other words the rest of Europe will decide policies that the UK will have no say on, but it will have to comply with. It is laughable and ridiculous! One would start to believe that the British leadership does not know what it wants anymore. Here he have the British PM Mr. David Cameron pleading the Scottish people not to leave the UK, because together they are stronger (or because England has access to the Northern Sea oil reserves).

But they reject the exact same argument for the case of themselves leaving the EU altogether.The union is stronger if all states stay together and cooperate. The British conservatives not only do not want the EU to proceed with further integration, they threaten to leave the club unless they get what they want, yet they still wish to have a say on what the EU should do or not, with or without them. I guess De Gaul was right after all!
Posted by The Eblana European Democratic Movement at 10:57 PM