Gay "Propaganda" is banned in Russia, when will they ban human right abuses? 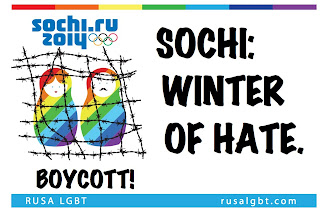 A disturbing news story has broken out from the largest neighbor of Europe, Russia. The government has approved a ban on gay "propaganda" as it named it, meaning gay pride parades, flags and anything that allegedly "promotes" homosexuality.

This is another sign that the country hasn't really changed that much from its authoritarian, totalitarian communist past. Most of the changes that took place after the collapse of Communism were on an economic, political and on ideological front, but not a social one.

Gay activists in the country were beaten up in a recent gay pride rally in June, while the attacks on gay people are on the rise in general and are not isolated incidents anymore. In the past, a rise in the number of attacks on foreigners from Africa or from the former USSR Asian democracies was a cause of concern, but as it happens in similar cases, after the foreigners it is always the gay people who are targeted. A lesson to be taught for many European states, notably my native Greece.

Russia of course is not the only country that witnesses a rise in far right and fascist outbursts. But it is the only country in Europe to pass a law that justifies and promotes discrimination towards gay individuals, instead of promoting a wider recognition for them. And the only developed country that consciously is moving backwards regarding gay rights.

The very notion of branding the gay pride as "gay propaganda" is laughable, especially in a country that  for decades after WW2, had established one of the best organized brainwashing, propagating and surveillancing systems in modern human history.

I hope that one day the Russian leadership will understand how ridiculous this law is and that they can not deny the rights to about 10% of their country's population. Homosexual individuals always existed throughout the history of the human race and in fact one of Russia's best loved music composers, Tchaikovsky was one of them.

The gay pride is a symbol of acceptance and human rights, though sometimes today it does not always stick to its real message and purpose. In some countries it has been transformed to a huge gay gathering and party, taking for granted the meaning for its existence.

The gay pride movement started after the Stonewall Riots on Saturday the 28 June 1969, where lesbian, gay, bisexual, transgender and questioning persons rioted following a police raid on the Stonewall Inn, a gay bar at 43 Christopher Street, New York City. This riot and further protests and rioting over the following nights were the watershed moment in modern LGBT rights movement and the impetus for organizing LGBT pride marches on a much larger public scale.

On November 2, 1969, Craig Rodwell, his partner Fred Sargeant, Ellen Broidy, and Linda Rhodes proposed the first pride march to be held in New York City by way of a resolution at the Eastern Regional Conference of Homophile Organizations (ERCHO) meeting in Philadelphia. (Wikipedia).

Since those days the movement has spread to almost every country in the "West," symbolizing the right to be of different sexual orientation. Although I am not a great gay pride goer myself, I am really happy to know that both the city I originally come from, Thessaloniki in Greece and the city I chose to live, Dublin in Ireland have the annual celebration of the gay pride.

It symbolizes that those cities and the countries in general are not morally pretentious, conservative and authoritarian, but they are embracing the diversity of the sexual orientation of their inhabitants and thus being open, liberal societies. It does not symbolize as the Russian leadership believes, that the country is immoral and is succumbing to any kind of propaganda coming form the West or the gay people.

The Russian gay community is Russian above all, they are citizens of this country and they have rights as they have obligations just like every other citizen. To be able to celebrate the gay pride, is not about following a popular trend that sweeps the Western nations, rather showing that as a society Russia is mature and aware that a percentage of its population has different sexual orientation. And that this is fine by the heterosexual majority.

It gives the gay community a chance to show themselves and manifest not only their existence, but their absolute acceptance by the society and state they are living in. It is in fact a collective statement of a nation, that being homosexual is totally accepted and tolerated among its society and it is not about the gay community rubbing their "immoral" practices to the face of the mainstream, conservative and heterosexual community.

The Olympic games bring all nations of the planet together in peace and acceptance of each other, in respect of basic human values and peace. In 2014 Russia will host the Winter Olympic Games in Sochi and so many activists, notably the British writer and broadcaster Mr. Stephen Fry, have called for a boycott of the games.

I do not think that such drastic initiative will be allowed, or supported by the majority of the governments, athletes and various political or sport groups. As the Olympics are generally a chance not only for peace, but of a great commercial importance for many sponsors, I doubt that they will back any move to cancel or relocate the games. Besides the Olympic games were never supposed to be political, though humanity has seldom managed to achieve that.

What I would love to see from all countries and the athletes that will be participating in the games, is to enter the stadium holding a gay pride flag together with their national one. Or perhaps all athletes could wear the pink triangle on their chest, as a protest of such laws and a message of solidarity to the Russian gay activists.

Sometimes it is best not to alienate or criticize a nation for its wrong decisions and direction. Such attitudes occasionally empower the hard-liners and unites the rest of the nation around them, so a boycott on the games might just do that. But if we silently transform the Olympic games into a big gay pride, we will give a strong message to the Russian nation, that the rest of the World empathizes with the 10% of the Russian population.
Posted by The Eblana European Democratic Movement at 9:07 PM