Marriage equality? Why not? 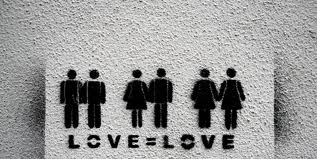 In the recent years, a real revolutionary idea gains support all over Europe and other regions of our world: Marriage equality for all human beings, or more simply the debate for civil partnerships and gay marriages.

Until  now, marriage was considered an institution that applied only between a man and a woman. That is what our religion and traditions taught us. On that belief we formed our societies and all moral laws to make them work and be coherent. So is it any wonder that any radical change in this institution, finds so many conservatives radically opposing it!


Well it is always one corrupt establishment that is staunchly against gay marriage and anything coming from the gay community: The Church. Especially the Catholic and the Orthodox Churches in Europe are the worse offenders. The Protestant Churches are more tolerant, that is why we see in those countries more progress and acceptance.

When the priests preach about "God's will" isn't it ironic that they think that love between two men or two women is shameful, punishable and unchristian, yet the rape of boys and abuse of many children in general committed by them, especially by the Catholic Church is something that they can commit and get away with it? For centuries the priests, monks and nuns of the Catholic Church were abusing and raping children all over Europe, Africa and Latin America. What a hypocrisy!

And all this because the Church is dominated by corrupt, narrow minded bigoted males. No gay man or woman will ever find peace and equality as long as these men are allowed to pour their bile and poison Christianity's true message, that is a message of love and tolerance.

And what about other regions of the world? In a recent article published in the Economist, we read about the unhappy marriages that many women in China suffer, simply because their husbands are gay. To hide their homosexuality they marry unsuspected women. But these marriages of course are loveless, sad unions. So both men and the women they marry fall victims of the society's outdated "morality." So there goes Asia's and other conservative countries' argument that homosexuality is a "western disease".

In many regions of Africa, Japan, India, and the Arab states, they boast that homosexuals simply do not exist in their countries and only western countries "suffer" from this disease. Well in the above mentioned article we see why. Unhappy marriages, unhappy lives, forced to live together with a person that you do not love or are attracted to. And what a pity for those women too. Cultures like these just create unhappy and unproductive people, easy to manipulate and guide; human robots.


So many "straight" people do not reach their full potential because some of them are just breeders. Their only purpose in this world is to make children. And not only raise children, but make sure they baptize them as soon as possible and initiate them into a dogma or religion. "Multiply the flock of God!" As if they have no other use or grace. But then they simply remain in their animal status and never progress as human beings intellectually or spiritually, if their only use is to procreate and the only legacy they leave behind is their children.

You see, some people have only yin in them. Some others have only yang and they desperately are trying to find the opposite to feel whole and fulfilled. They can not exist unless they are in some union with the oposite sex only. Some people though have both yin and yang in them, so they do not need the opposite sex to feel fulfilled.

They only need another human being of any sex or orientation, that will be able to connect with them spiritually, emotionally, mentally and physically. Who would you value more; a wife beater husband, an alcoholic dad, a useless mother and bad wife, or a person with developed spirituality and intellect, no matter of what sex, age, color or sexuality he or she belongs!

Marriages should be among two human souls, not just two farm animals that procreate and produce more workers. I know I put it a bit bluntly, but that's what it is. Any two people who want to share their lives together, should be able to do so. We only find gay "marriages" weird and a threat because we are used to see only "straight" ones.

Besides, we do not discuss of having two men, one in a dress and one in a tuxedo in a church, having the exact same ceremony as a straight couple. Rather about a legal platform, that will give both gay and straight marriages the same and equal status.

Or give the same protection and rights in a case that one partner is a non-EU national, just as any straight person can have his/her rights protected when he/she marries an EU national. So in other words, marriage equality should be passed in a pan-European level and accepted, protected and promotes in all European states. There should be no divisions on this issue either.

And how about adoption? Well for the moment I do not favor such move as I believe it is too soon for a society to digest both the marriage and the adoption. Not that I believe that gay parents are any less competent in raising a child than a straight couple. If any alcoholic, drug user, violent criminal or a religious fanatic can have the right to have children, then why not a gay person?

I just think that it will take some time for our societies to fully accept a child that comes from a gay marriage. And for the child's best interests, I think that for the moment we should focus on pushing for marriage equality.

That of course should not exclude the case of one parent already having one or more children from a straight relationship, to have his/her gay partner able to adopt these children if their natural parent proves unwilling to contribute to their upbringing.

Or he/she is simply dead. Many women find themselves in gay relationships with other women after an abusive marriage to a man and in many cases they are already mothers. If their former husbands are unfitting or indifferent in the upbringing of their children, why can't the new gay partner of that mother adopt the children and provide for them?

Having said that, I find that many people in the gay community are not ready either for such progressive changes. They simply do not understand the concept of love, because nobody has taught them that during their lives. Many gay people are lost in obsessions, sexual addictions, fear, various complexes and a constant search to find themselves, to be able to commit to one person and only, or even worse have children.

I do not blame them. They have been systematically bullied, mocked, forced to live a double secret life and it is not wonder that they seem lost. But they will only recover and act as normal human beings, when the society stops discriminating against them, slander them and mock them in every chance they get.

It is simply what I have said above: the destructive influence of religion's indoctrination and fanatic dogmas against human sexuality for many centuries, that created empty shelled people, messed up, desperately in need in finding acceptance, love and a purpose. Many gay people live their lives as "normal" straight people, only to seek the occasional sexual experience in a public space to satisfy their needs.

Sex is what identifies them as homosexuals and for them it is usually something shameful and they try to hide it, never accepting it. Others feel that homosexuality is a "culture" and they identify themselves only through the gay community and certain bars, music artists, bands, occasions, events or programs. In other words they broke out of the ghetto bars or parks that gay people used to meet in secret to satisfy their sexual needs, only to create a new ghetto, this time in their own minds!

For me being gay is only a part of who one person is, not who she/he is. And I dream that one day, people will chose their partners not according to age, sex, sexual orientation, color, race, religion or ethnic background. Rather to what they see in the other person's soul and heart, according to compatibility, common traits, values, according to chemistry, attraction and the emotions that one evoke to another. Simply two souls embracing and loving each other, not two mammals that need to procreate.

Not that I am against marriage between members of the opposite sex. On the contrary I believe that finding a person that can be your other half and spend your life with, turning the "me" into "we" is the greatest achievement that one can achieve. The ultimate challenge and goal that any human being should strive to achieve, in order to grow as a spirit and entity.

But in some cases our other half is not necessarily what we would expect it to be, of the race, sex or age that we would expect. So why waste or limit so much potential? And remember, not too many decades ago, it was unthinkable for a person of one race to marry a member of another race! I hope soon one day we will end the taboo of sex and sexual orientation too.


Posted by The Eblana European Democratic Movement at 11:12 PM