Now it is the time that Europe needs "European" media! 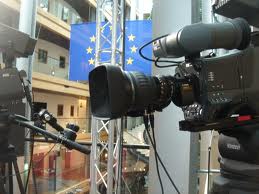 During this crisis every European is trying to get as much information about what the future will bring for him, his finances, his job, household and children. We all read newspapers watch the news and trying to find information about how does this tragic economic crisis will affect our lives in the future.

Of course most of us trust the information that we receive. But how accurate is it? If we think that most of the World’s major media organizations are owned by 6 major multinational corporations, then one should consider their agenda. The few that escape them is owned by local governments and small groups of rich elites that have been dominating our countries for decades. Their interests lie in preserving the current status quo, the nation state with the current ruling elites. Each protects and supports the other, with only one purpose. Stay in power for as long as they can.

With all this in mind, it is no wonder that with this crisis we saw some unacceptable demeanour from our “national” media; the German (and unfortunately not just them, most rich European countries behaved similarly) media calling the Greeks lazy and corrupt, when this is far from the truth. In response the Greek media stated calling the Germans “Nazis” and started unearthing every crime that the Nazis committed in Greece.

And the result is? Exactly what they wanted to achieve; divide the European public opinion. Because some do not like the loss of their influence over their country and the existence of the EU simply brings challenges. All they have to do is to raise nationalism among the population and keep small divided nation states and their interests intact.

Conservatism and protectionism was always popular in European politics and some think that the European project and the euro have gone too far. Take the example of Britain. Their “national” media have been propagating against the EU since the Thatcher era, presenting everything that comes out of Europe as a threat to the British way of life. Everything that is wrong in Britain is blamed on its EU membership and not in its special relationship with USA, the City of London and its affair with the Markets and the Banks that their interests Britain is seeking to protect above everything else: even the benefit of its own citizens.

Similarly in Norway and Iceland there are other groups that lobby against their country’s EU membership. The fishing lobby in both countries is particularly strong and a serious factor for those two remaining outside the EU. But of course they do not tell their people that by being “half way in” the ordinary citizens are the ones who lose out, in democracy. Both countries are members of EEA (The European Economic Area) and they have to follow most of EU’s legislation. But the citizens do not have a say in this legislation because as they are not EU citizens they do not have representatives in the European Parliament.

Of course the rich Norwegian elite have little to worry since no one in Norway, an oil rich country, complains.  But how about other EU members? In Germany the political, industrial and economic elite profits and benefits hugely by this crisis that is destroying their southern “partners!” Of course it is easier to blame the “lazy” and “corrupt” Greeks, Spaniards, Portuguese and Irish for their bad economies and justify why they are imposing such harsh austerity on them. Little did the German public know that all those years while those countries were overspending, they were in fact helping the German economy.

With higher inflation because of the euro, they were driven to over spending thus helping German exports. So there is no wonder that the German media are more than happy to portray the austerity program as something that is necessary, to teach those incompetent southerners how to run their economy. But remember that they did something similar in the past and managed to turn a whole nation into being supporters of the worse crime ever committed on our continent.

How we could solve all this mess and reinstall unity among the European population, solidarity but also a fairer view of what is really going on in our Continent? Well how about pan-European media, like newspapers, TV channels, radios and magazines? Until now, only the European "blogosphere" offered an alternative and independent point of view. Yet Europe and the EU are only now considering exploiting it, during the Cypriot Presidency of the European Union Council.

Besides, receiving the news with a European perspective, not only offers a more spherical point of view. It also creates a better sense of “belonging!” There is no more “us here and the others outside our borders.” Once you receive regularly the news of other countries with a more unbiased perspective, then not only you have a better judgement but you also understand what the people in another EU country are going through, how they deal with the crisis and what solutions or ideas they are putting forward.

That would be a far cry from what we have so far, having our media inciting hatred and nationalism, distorting the truth and protecting the interests of few rich elites. We can not go back to what we had before. Remember, in all the wars that our elites got us into, it was us who were dying in the battle fields. Now it is us again who are paying the price for their economic experiments and power struggles between them. What we need is more news coming from pan-European media and the exploitation of the European "blogosphere;" to break the voices of the monopolies, the propaganda and the blinded nationalism.

Posted by The Eblana European Democratic Movement at 11:03 PM