Gay Marriages and Homophobia in Europe. 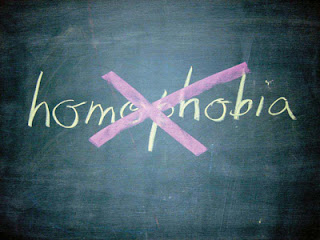 "Homophobia is damaging people’s health and careers across Europe and the problem may be worse than reported because victims are scared to draw attention to themselves for fear of a backlash, an EU study said. The European Union Agency for Fundamental Rights said police in most countries were incapable of dealing with homophobic crime – ranging from verbal abuse to deadly attacks – and said many governments and schools failed to take it seriously enough."
From the Irish Times.

Isn't it sad that in the year 2010, Europe is still divided by a "Rainbow Curtain". More than 40 years since the beginning of the Gay Rights Movement in America and its spread throughout the western or westernized countries, Europe is still divided. The west- northern states in their majority recognize same sex marriages or civil partnerships, but the eastern -southern states do not and have no plans in doing so anytime soon.

It is also intriguing that 40 years before WW2 the first organization promoting education about homosexuality and the abolition of laws against homosexuality was founded in Germany, before the Nazis' rise to power ended all efforts. We could say then that if the Nazis stopped it, then every government that acts in a similar way behaves like them.

Homosexuality existed always in human societies. From the ancient Greeks, Romans, Egyptians, Persians, the Celts, Indians, American Indians, every society in the ancient world was tolerant of it. In ancient Greece and Rome sexual preferences and partners were as natural, tolerated and accepted as today is the music that you listen to.

In fact in ancient Greece older men usually were the mentors, teachers and often lovers of younger men. They were teaching them how to fight, use the sword and even how to make love to a woman while they were in a homosexual relation.

In ancient American Indian tribes, homosexual men were honored and respected people. They did not go to battle like the rest of the men, rather stayed back and became teachers or minders of the children. They were often taking roles of the shaman and other respected figures.

From just fun in dolphins, to strengthen social ties in our closest relatives the bonombo chimpanzees. Male to male couples of geese are often proved to be more successful in raising young. Because both are stronger than females, thus having an advantage. One of them mates with a female and they drive it off its nest so they can raise the young on their own.

Female lionesses often practice same sex games, in order to strengthen their ties before a hunt. Scientists have found a species of octopus on the bottom of the oceans that when its population explodes, a percentage of its male populations "turns" gay and their population is reduced again. In other words nature controls some species populations' by homosexuality.

Homosexuality  is in fact a natural practice and occurs in about 10% of the human population of all races, every ethnicity, religion, sex and age. Now why we ended up loathing and humiliating our homosexual minorities comes down to religion and it's role in controlling human sexuality and freedom of expression.

Sexuality, passion, creativity, love, emotions, free thinking are all interconnected. If you want to control one, you will have to control all others. And all three main religious movements (Judaism, Christianity and Islam) did just that. After  centuries of suppression of human sexuality it became the norm to the masses of people that homosexuality is something evil, devil derived, ridiculous and laughable, a degradation from how God wanted us to be.

I will have to laugh on this after the recent scandals of child abuse in the Catholic church. They preach against consensual sex between two adult males or females, while they were raping innocent children throughout Europe and America for decades or even centuries. Hypocrites!

So we ended up having homophobia rooted deep in our mentality and only recently attitudes started to change again. In few European countries they have already given full rights to homosexual couples, while in others are taking steps towards it.

There is also a huge misunderstanding on the issue of gay marriage. Gay couples do not just want to get married in a church like the straight ones. Rather they are seeking same legal status for their union, in all aspects of it apart from sex. Buying a house together, inheritance, social benefits etc. Legitimizing by law their union and achieving equal status for it as any couple, gay or straight should. And I really do not understand the Church's objection to this.

Why it supports monogamous relationships for all people while they object to it for gay people? One would thought that promoting monogamous lifestyle and sex life in gay people would be what they wanted. Since they can not eradicate homosexuality as it is a natural occurrence, then why not try to bring it to the same level as heterosexuality?

Who would want gay people to have casual sex only and never be able to form open, loving, caring and long term partnerships, that is more natural and healthy than hiding and practicing sex in the shadows? In that way, they are pushing the gay minority to have an unhealthy lifestyle that harms them, with the spread of STI's and AIDS.

The role of the media is also dubious. They are promoting the gay lifestyle in TV series, soap operas and reality television, but they seem to promote only one type of homosexuals. Are there really any cliche types of gay people? We have abolished apparently ghettos in our neighborhoods, but we have implanted them in our heads.

We are giving "freedom" to homosexuals to be open and "come out", but we immediately promote a stereotyped lifestyle that all of young gay individuals should follow. Ghetto is not just an area that you live in, it is also a state of mind. I think the society is succeeding in creating an image of gays that is camp, funny, feminine and interested in clothes and fashion. It forgets though to mention that some of the greatest artists, painters, ballet dancers, writers, actors, musicians, thinkers and even politicians and military men in human history were homosexuals or bisexuals.

Why would anyone object that two people that love each other, can form partnerships that have legal protection for the two partners in case of death or separation? Securing and protecting not just the interests of each individual in the partnership from one another, but in the case of death, from the family of the deceased partner.

The religious conservatives hold this notion that sex is only acceptable for procrastination purposes, despite observing even in Nature and other animal species that sex is not used just for this. And even if it did, why would we like to bring ourselves to the same level of the other animals? We claim that we are the most advanced species on the planet and we take pride of it. But they insist when it comes to sex, to take example of the allegedly laws of Nature and have sexual relations only when we want to have kids.

Humans are the most complex species on this planet, yet we chose to ignore their mental or emotional needs that are more complicated than any other animal. And from the spiritual angle of this, if two souls are in love with each other, why should the body be the obstacle to their union?

We insist in projecting young gay people, while in the most difficult period of their lives, to this damaging, humiliating experience of having to endure bullying, discrimination and rejection even by their own family. We don't realize that those practices only create damaged and dysfunctional people in our societies, afraid to be what they want to be and behave in a natural to them way.

There is also the issue of gay couples adopting children. For the moment I would not support such move by gay people who do not already have children of their own. Not that I do not have faith that gay people can raise a child as well as straight people. But our society is not ready to accept gay marriages, so I have concerns about the possibility of bulling that the adopted child might face at school, for having two same sex parents.

I would not exclude it though later, after our societies are fully ready to accept this and gay marriages have become as normal as the heterosexual ones. But for the cases when one partner has already kids by a previous heterosexual relationship, is another thing. Their other half should be able to adopt the children and give them protection and financial security if all parties agree. It is not unusual for people to have both homosexual and heterosexual relationships throughout their lives and have children with their straight partners.

It is time to rethink the family structures and norms that we have set for our societies. Since our sexuality is not as black and white as we think or are told it is and since our societies are changing fast, what good is to cling in old and failed practices that only perpetuate human misery and sadness?

Posted by The Eblana European Democratic Movement at 3:42 AM