Is immigration the solution to Europe's demographic problem? 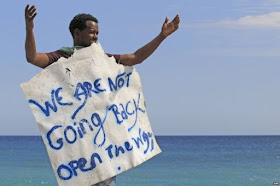 Europe is faced with a number of challenges that require careful planning, further collaboration and a united response, plus a decisive foreign policy action.

For the past few years our continent's immigration problem and refugee crisis, have caused cracks in the EU itself, with Brexit and a number of Central and Eastern European countries refusing to take refugees in.

And although most of the new arrivals in Europe come from war torn countries like Syria, others are coming from Africa and South Asia, in search for a better life.

European states have long debated, argued and often disagreed on how to deal with the issue. Technically, the best way to limit the flow while finding a solution, would to reach the root of the problem.

There is a huge inequality in our world, with some nations enjoying a high standard of living, while others having the majority of their population living in poverty, with lack of education, opportunities and other basic human needs.

It is naïve to imagine that the people from the poor regions of this world, will ever stop trying to reach wealthier countries, in hope for a better life.

Besides, as Europe and almost every developed region of this planet, is faced with fertility rates decline and an ageing population, immigration could provide a solution to this predicament. Yet it also poses its own challenges.

How do you assimilate people with often totally different culture than yours, or how you stop the rise of xenophobia and the various Far-Right movements that have been established all over Europe in response to high immigration?

In addition to the economic inequality, there is also another imbalance in our planet. The poorer or developing regions, experience a population boom that if not dealt with soon enough, could make matters worse.

Overpopulation in one region, is putting an extreme pressure on its governments to find resources to accommodate all these people. And as poorer families are usually the ones who have more children, it is evident that there is a link between overpopulation, poverty and lack of education.

Nowadays, the problem is not only overpopulation, but also the abnormal disparity in its distribution. On the one hand, great challenges of overpopulation are presented to poor and emerging countries while, on the other hand, the European Union, Japan and the United States will need to revise migration policies and implement new changes in their economic models if they want to guarantee pensions and social security contributions in the coming years. (World Economic Forum)

It is the very economic model that Europe has adopted post WWII, that contributed to the financial recovery and booming, but also to smaller families and a constant decline of its population fertility rates.

Better education, the equal integration of women in the workforce, consumerism, higher living standards that alter our expectations and goals in life, the extension of our life expectancy, all contribute the phenomenon of an ageing and declining population.

Yet in the past, Europe had similar mentality and culture of bigger families, just as many of the developing countries have nowadays. It needed people to colonize the rest of the world, or sustain its industrial and economic revolution. Just as our continent switched its priorities and policies, so can other regions.

Thus perhaps the solution to Europe's immigration problem does not lie in sending boats to stop the flux of migrants, or raising walls across the entry points. Maybe we should try helping others reaching our living standards, thus tackling global wealth inequality.

If the poorer regions close the gap, then their societies will also follow the developed nations' economic or social model. Combine this with better education, then their youths will have all they need to start a better future in their home countries, rather than risking their lives to enter illegally in Europe.

It is proven that immigrants arriving in Europe, adapt in its society and adopt local family models after one generation. Their birth rates fall to similar levels to those of European families. So if they can achieve this in our continent, why can't they do it in their own countries, if they achieve similar living standards?

Another one of Europe's societal changes that can be promoted to tackle overpopulation, is the decriminalization of homosexuality and the promotion of marriage equality in other regions of the planet.

If same sex couples are not seen and a taboo and are widely accepted, then they can contribute to the population reduction in the developing world, together with the promotion of smaller families and more educated populace.

While some of the Western "heavyweights" like USA and Britain chose isolationism and conservatism, some of the smallest European nations are realising that to tackle the problem, we need to engage with the poor nations and help them.

“To limit the migration pressure on Europe, a part of the solution is to reduce the very high population growth in many African countries,” she stated. Tørnæs additionally noted that curtailing African population growth is important for Danish foreign and security policy.(Foreign Policy)

That perhaps is a much better solution, than rescuing capsized boats full of desperate, drowning people and the EU as a whole needs to participate and follow Denmark's example.

Educate the poorer countries about overpopulation and its impact on the environment, or their societies and their natural resources.

If they don't, we are going to be faced with ever increasing pressure for migration to richer and less populated countries, with potentially the cause of either conflict, or starvation in poor nations.

Our continent is one of the regions that will feel the pressure to accept more immigrants as we are currently facing from Africa and the Middle East. We need to sort out our policies on immigration and our demographics. Time is running out and we need to act soon.
The Eblana European Democratic Movement at 1:07 PM
Share